FEATURE - "Born to be a Farmer"

When Riggin Holmgren was still in kindergarten, his mother checked him out of school one day. It seems some men working on the roof needed the tractor started so material could be raised up in the bucket. Riggin, at just six years old, was the only one who knew how to get the farm tractor to turn over.

A few years later, Riggin showed a hog at the county fair and was paid handsomely for it on sale day. When he talked about all he could get with that money, his grandfather gave him some good advice.

“Why not turn your money into more pigs?” he told his grandson. Riggin took his advice to heart.

It is those lessons, learned from his youth, along with a keen business mind and a drive to constantly improve and diversify the farm he grew up on, that helped Riggin and his wife, Laura, earn the Utah Farm Bureau Young Farmer and Rancher Achievement Award last November, representing South Box Elder Farm Bureau.

They then went on to claim a fourth-place finish at the American Farm Bureau annual convention in January. They bested nearly 40 other competitors from across the country to earn that spot.

Riggin is a farmer and rancher in Bear River City, working on ground tilled and turned by five generations before him. Laura said her husband knew from the beginning he wanted to follow in the furrows his ancestors has cultivated, even through high school and college, where he became an outstanding football player.

“Even with all that, he took every chance to come home and farm when he could,” she said. “He truly was designed and built to be a farmer. He has a serious, serious drive.”

Laura, on the other hand, grew up in the St. George area, as far away from cattle and crops as she could be. The two met at Utah State University and have now been married three years, with a one-year-old daughter.

“I didn’t grow up on a farm, but I got here as fast as I could,” she joked. Today she works part-time for the Box Elder County Extension office and is the farm’s go-to girl, whether it is dealing with the seasonal employees or driving onion truck.

“Every farm needs a go-fer and that’s me,” she reasoned. “And I’m just fine with that.”

Earning the Utah Farm Bureau Young Farmer and Rancher award, given to those 35 years of age and younger, has not been an easy feat, Laura admitted. The couple has applied four different times in the past four years. They were named runner-up two years ago. With each yearly disappointment, they took the opportunity to improve on the information they submitted.

“It is a hefty application,” she said, of the 11-page document. “They want to know your financial status, your leadership skills, your role and responsibility on the farm, where you came from and where you want to go, but there are no self-identification markers anywhere.”

In other words, nowhere on that application is there a way for the judges to identify who the applicant is, or even what part of Utah they are from, so winners are not chosen because of name recognition.

The Holmgrens applied as fulltime farmers, a category with fewer applicants, Laura said, because so few young people can make a profit as career farmers in this economy. The numbers are even lower nationally.

After the state win, they had just 14 days to get their application “fine-tuned” for the next competition, held in Austin, Texas. Laura said they were quick to reformat their final submission, so it was more “user-friendly” for the judges, who had 38 other “novels” to preview.

The best part of that national competition, according to Laura, was the opportunity to mix and mingle with other young farmers and ranchers “who are all in the same boat as we are.” She said it was a chance to make friends and even make a few business connections. “It was a really good networking opportunity.”

Another highlight was listening to President Donald Trump address the crowd one night of the convention.

“He has done a lot to make life easier for farmers and ranchers,” she said. It was heart-warming for her to hear him praise the career choices of those young couples. “He was very professional and told us, ‘This nation needs more farmers and ranchers like you.’ It was a cool thing to be a part of.”

The second day of the convention, the top ten finalists were selected, the Holmgrens being included in that lineup.

They then had to face a panel of judges who heard their story and asked them questions about their farm, the growth and economics of the operation and their own leadership abilities in their community.

Riggin, who serves as a Bear River City councilman, talked about the cattle that has always been raised on the family homestead and that he has diversified the farm more recently by turning a hundred acres into onion production, as well as putting in a drip system to maximize irrigation.

“They also asked about family relationships, and why we are doing what we are doing,” Laura said. Riggin’s response to them on that note was simple. “I am a farmer because I want my kids to grow up here and be raised the way I was.”

His answer, along with their application information, must have resonated somewhat with the judges because the couple placed fourth overall, earning a Case IH 40” Combination Roll Cabinet and Top Chest, as well as a $500 parts card. For their Utah achievement, the Holmgrens received a 2019 John Deere Gator ATV, courtesy of Cache Valley Bank and Stotz Equipment, along with an insurance policy for it from Farm Bureau Financial Services. Both will be put to good use on the farm.

Awards and prizes aside, Laura said they are grateful for Farm Bureau for the many opportunities they provide with learning and development that have proven essential to the longevity of the Holmgren farm. They were proud to be the chosen representatives from the state they love while promoting something they are both passionate about. 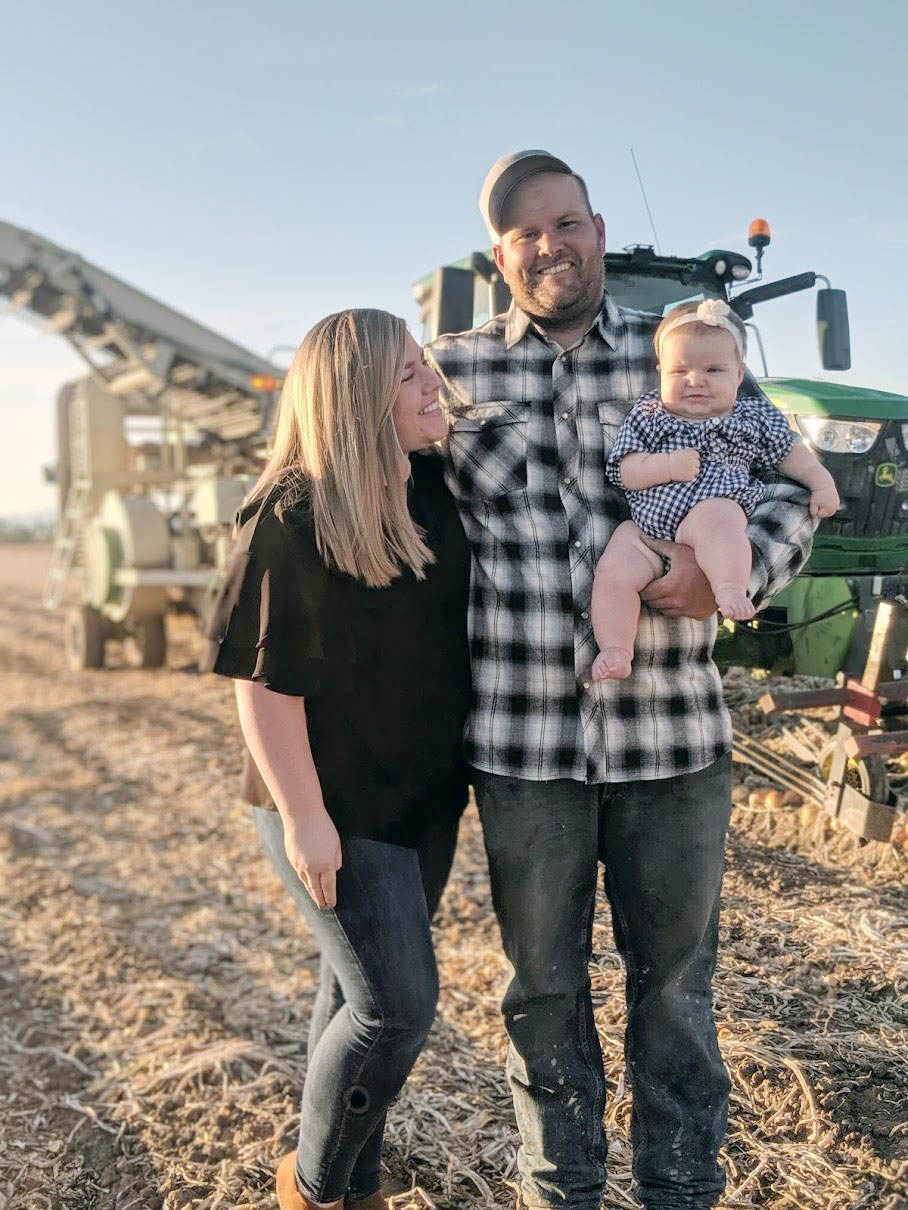